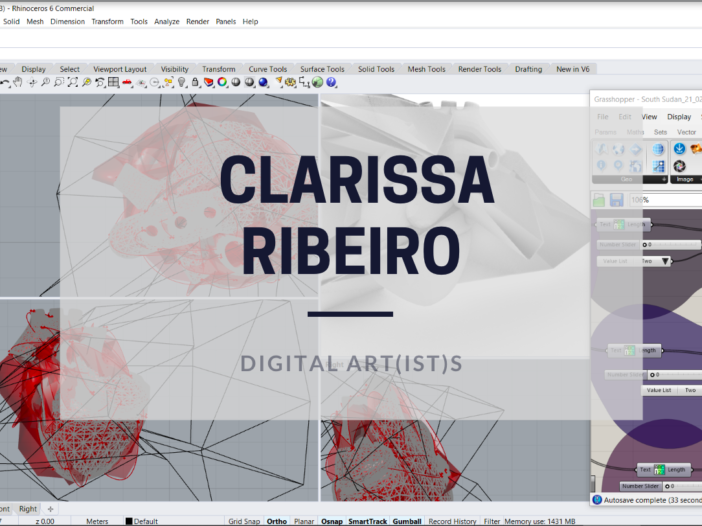 Clarissa Ribeiro is a multimedia artist and researcher with an interest in cross-scale information and communication dynamics that impact human-nonhuman behavior and other macro-scale emergent phenomena. She has been exploring the metaphysics of information-visualization in subversive morphogenetic strategies that welcome the Animistic to navigate ecologies-as-cosmologies. Digital Humanities is expanded in her practice in explorations that includes a series data-sculptures she has been producing since 2017. These works resonate with issues that comprise geopolitics, foreign affairs, global economy, human rights, and minority rights.

Clarissa holds a Ph.D. in Arts (ECA USP, University of Sao Paulo, Brazil and CAiiA hub of The Planetary Collegium, University of Plymouth, UK), Fulbright Postdoctoral Scholarship awardee (UCLA, Art|Sci Center/James Gimzewski Lab, UCLA), M.Arch. (USP University of Sao Paulo, Brazil), B.Arch, member of the UCLA Art|Sci Collective (2013-present) has been contributing as a senior instructor and invited lecturer to the UCLA SciArt Summer Institute (2014-present). She is a Professor at the University of Fortaleza in Brazil, her home country, where she directs the LIP – Lab for Innovations and Prototyping – and coordinates the CrossLab research group and art collective. She plans to rejoin Roy Ascott Studio’s team in Shanghai, accepting the ‘Pete Townshend Endowed Senior Lectureship position in Performative Technoetics.

When and why did you decide to pursue art? How does your art correlate with your academic career in art history and architecture?

Before starting my journey as an undergrad in Biological Sciences back in the 90s, I got a diploma in Music Teaching from the State Conservatory. My leap from Biology to Architecture was inspired by architects such as Marcos Novak and Greg Lynn who were simulating the morphogenetic strategies of nature in experiments using cutting edge computer graphics to produce form from coding, sometimes using data circulating in the cyberspace to generate irregular and intricate virtual, liquid architectures.

I must confess that, beyond understanding myself as an artist – as if it could possibly be assumed as a useful category or a tag – I see myself in transient states. That means I create in a state of becoming, accepting the fact that the variables change all the time, and the variations and changes are influenced by rules that are not exclusively art-dependent. Those rules echo a plural body of interests and knowledge from chemistry, biochemistry, and biology, superposed and enmeshed with computer science – comprising artificial intelligence, algorithmic modeling, the use of microcontrollers to play with inputs and outputs – all entwined by a visceral understanding of the creative process as a collective venture. Nesting all this, Digital Humanities stands as the ultimate weaver offering tools, strategies, and discourse to dig into all that concerns the individual and collective efforts to sustain life on Planet Earth.

Why do you incorporate Digital Humanities into your art?

Having a world split between far-right populists and socialist dictators, issues related to social justice, minorities’ rights, climate emergency, arise as part of a collective effort in supplanting the ghosts and scars of colonial times. As a digital artist, I feel deeply impelled to find strategies to have my work contribute to navigating the fake news waters in an era we are under social media algorithms’ influence, NFTzing or Tokenizing the arts and discourses. Navigating in a superposition of research and teaching positions across Brazil, US and China subsequently, gave me the opportunity to see the entwined connections between local and international political tendencies and strategies and their impacts from a birds-eye view.

How has your art changed since you have become interested in Digital Humanities?

I couldn’t escape Digital Humanities as a place from which to elaborate my practice, as my Ph.D., advisors, and instructors, are rooted in the field. From the very beginning, my practice was established within the Digital Humanities mainframe, concerned with issues that question established reductionist understanding of ‘what is life’, consciousness, what does it mean to be a social being – less a human detached from nature and more a mammal among other mammals – sharing complex molecular codes and superposed microbial populations, ecologically interconnected and interdependent form a cross-scales point of view.

I identify a major shift in my practice when I turned my attention and efforts to the political use, analyses, and visualization of Big Data, how the AI and social media algorithms can influence and directs human collective behavior and, by consequence, economy and politics, geopolitics, the politics of public health policies. These interests were exponentially amplified following the impacts of the COVID-19 outbreak. I see this shift as a political facet of the very understanding of the neologism ‘molmedia’.

Please tell us about some of your recent Digital Humanities artworks

The work ‘Political Crystals’ (2018) that was on show in Brisbane, Australia at the SIGGRAPH Asia 2019’s ‘Deep Dreaming Art Show’, invited the public to reflect on the dramatic definition of  ‘geo related’ political borders during the 2018 elections in Brazil and the relation to the structural dichotomy of the social media’s domains. The work considers the importance of including political debate in technology-based artistic practices emphatically acknowledging the field of Digital Humanities. Combining algorithmic modeling strategies for data visualization with digital fabrication, the work includes the generative design of a series of geometrically intricate crystals-like 3D models using as raw data Twitter APIs having as the search phrase hashtags related to Brazilian 2018 presidential elections twitted from defined geolocations (9 of the most populated cities in Brazil in million inhabitants). The choice for the installation was to select the largest cities of the country by region considering having a representative sample of Twitter users’ behavior considering Tweets that include opposite hashtags (#nothim and #yeshim) emphatically depicting the bipolarity observed in the election’s results. The Tweets (primary data) were converted using a sequence of components from characters to numbers lists to points in x, y and z axis – building the spatial network from which an intricate and interlaced continuous surface was generated and converted into a mesh. A smoothened representation of the mesh was then calculated, not increasing the face count and allowing volume to enhance specifications. The resultant geometry was baked and exported as stereolithography models for 3D printing. ‘Political Crystals’ navigates research fields such as Computer Graphics, Socio-Technical Systems, Data Science, Complex Network, Data Visualization and Analysis, and Computational Aesthetics in a transversal move that incorporates Digital Fabrication and Altered Reality strategies for its ultimate materialization as an artwork. From one perspective, the Political Crystals’ 3D shapes can be seen as aggressive and sharp materializations of online hashtags’ wars that include metadata tags. From another perspective, the 3D shapes and its data-based generative modeling, evoke sublime and numinous aspects of natural crystal cluster while hiding the dramatic force of a manipulated faithful army in spreading hate discourses against minorities, defending a populism that returns to its fascist origins in Latin America. I had published a paper in which I discuss aspects of the work that are relevant for Digital Humanities in 2019 at the ISEA 2019 conference proceeding.

In “If You Hold a Stone Hold it in Your Hand’ (2020), presented live as part of Los Angeles Garden at Ars Electronica 2020 and invited to be on show at the ChinaVis 2020 exhibition, using data from the World Health Organization (WHO) referring to the number of cases per country of Coronavirus disease (COVID-19, the infectious disease caused by the SARS-CoV-2 virus) – using primary data from the 7 countries with the highest number of cases – United States, Russia, Brazil, United Kingdom, Spain, Italy and France, the resultant shape is a “geometric contaminant” emerging from the interior of a 3D model of a humans’ hand. The work invites to meditate on the restrictions to touch each other’s bodies due to the potential presence of viruses on the hands’ surface motivating debates on mental health, social, economic, and political impacts of government-imposed social distancing measures around the world to reduce COVID-19 morbidity and mortality rates. We must be aware of the fact we are living in the Big Data era and data can help us in making sense of the dynamic forces that shape realities.

My most recent incursions include the work ‘Data-Nests’ (2021) dialoguing with Amy-Claire Huestis, professor at the Kwantlen Polytechnic University in Canada, for the project ‘Co-making this world’ configured initially as a session for the CAA 2021 conference. This experimental session followed an alternative format, peering into the subject of making and formation of the world, positioning the artists as collaborators in this making together with non-human entities. For the ‘Data-Nests’ project, considering the place of the artist as enmeshed in a world human/non-human, the Black-capped Chickadee became, or better, was invited as, a partner in the design of potential nests from the algorithmic transduction of the bird’s vocalizations into a data-informed sculpture. From the decibel (dB) variation of the original sound, a points’ cloud was generated using a graphical algorithm editor to produce a series of potential nests as data-sculptures. The final object was CNC carved in plain wood and placed in trees as a subtle intervention – the gesture comprises the intention of giving the bird the hypothetical choice or opportunity to actually use as a nest the algorithmic co-creation — that is back to nature as if it was never removed from it.

At present, I’m expanding the generative strategies by including machine learning (ML) and Gaussian Mixture for the series of data-sculptures (available on Open Sea). Following the interest in exploring post-colonial issues comparing the impacts in African countries to the ones in Brazil and Latin America, as a Brazilian artist, I believe it is critical to connect local and international sociopolitical concerns in order to reveal the global interconnection of events that affect the lives of humans and non-humans.

A few weeks ago, on March 20, 2022, as a contribution to Victoria Vesna and Sidharth Ramakrishna’ Hox Zodiac edition, I presented the animation ‘Dragon Depot’ (2022) inviting to mentally navigate the ruins of a Mobutu’s era pagoda in the Democratic Republic of Congo (DRC) and meditate on the wars driven by human civilizations’ rush for energy sources. These wars include the ones connected to international disputes to guarantee access to minerals used in ‘green energy’ ‘solutions’ that can help free western economies from petrostates’ dependence. The project is a fast-forward flythrough on the algorithmic model generated from an image of a cobalt ore. The audio is a composition using fragments of fake engine noise for Tesla Motors super silent electric vehicles (EVs).

When we talk about EVs batteries we are inevitably talking about Congo. At the moment, about 70% of the world’s cobalt comes from the DRC and the vast majority of that comes from large-scale industrial mines. We use cobalt to prevent our batteries – including the ones in our smartphones, laptops, and EVs – to get super-hot or even help them run longer without a charge. As delegates meet at Cop26 in Glasgow, the transition from petrol to EVs is being talked about as a key step in reducing carbon emissions. Global sales of passenger EVs are expected to soar from 3.3 million in 2021 to near 66 million in 2040 and the UK is considering the government’s ban on the sale of petrol and diesel cars from 2030. The World Bank estimates that demand for cobalt production will increase 585% by 2050 unless we find a different alternative. It urges to consider the social, economic, and political impacts this shift will have in Congo.

Interested in participating in our group? Membership is only  $25!

Any questions? Feel free to reach out here!