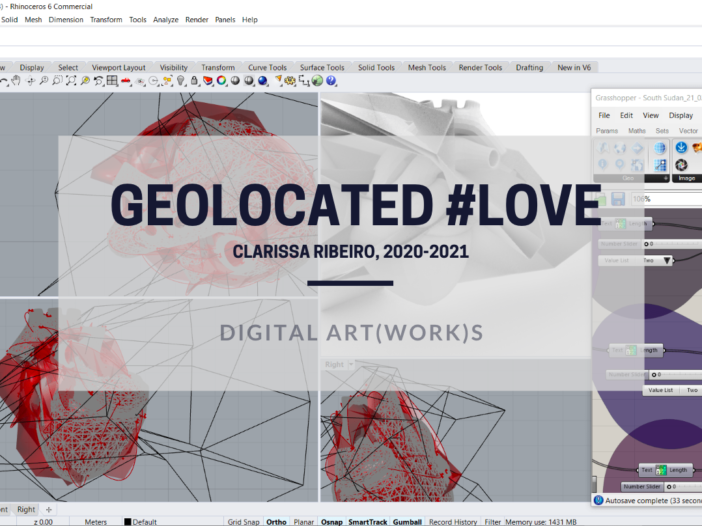 Spotlight on the artwork GeoLocated #Love (2020-2021) by Clarissa Ribeiro.

For a full interview with the artist see LINK

Clarissa Ribeiro is a multimedia artist and researcher with an interest in cross-scale information and communication dynamics that impact human-nonhuman behavior and other macro-scale emergent phenomena. Digital Humanities is expanded in her practice in explorations that includes a series data-sculptures she has been producing since 2017.

Geolocated #LOVE (2020-2021) comprises a series of 4 (four) data-sculptures named accordingly to each of the world’s riskiest countries ranked by the specialists of the International SOS – Libya, Somalia, South Sudan, and the Central African Republic, I traced and used as raw data Tweets from the four countries’ local users containing the hashtag #LOVE. My intention was to explore critically the categorization and the international economic and political engines that lead to the marginalization of populations and environmental degradation in places where all living beings strive for equal enjoyment of human rights and fundamental freedoms.

In a quick glance, it is possible to observe how geopolitics had and continues to have an influence on the conflicts that led countries like Libya, Somalia, South Sudan, and the Central African Republic to be ranked as the riskiest on Earth by the International SOS. Lybia is home to the largest proven oil reserves in Africa. Somalia is one of the poorest countries in Sub-Saharan Africa as a result of decades of civil conflict and government disintegration. Despite South Sudan ranking third in oil reserves in Sub-Saharan Africa with roughly 3.5 billion barrels produced annually, having 90% of the gas and oil reserves still untapped, the free money created a large patronage structure that helped unify competing factions while also masking the country’s fundamental ethno-political divides. Despite bountiful gold, diamonds, uranium, the Central African Republic has been stuck in civil war and the legacy of colonization.

Please explain the creation and production process of Geolocated #LOVE

Transduced into a points’ cloud in a 3D Environment Modeling Software, the codified information tweeted from each one of the four most dangerous countries — following an animistic and subversive approach to data-visualization — was encapsulated in irregular solids generated within the geometrical core of a human’s heart. The data-sculptures where 3D carved in a 4 axis Roland MDX-540 milling machine in plain wood and were on show in 2020 at the MAUC (University of Ceara Museum of Art) in the city of Fortaleza, in Brazil.

Sculpting the data-objects in plain wood using a 4-axis CNC milling machine comprises an effort in questioning. It is an opportunity to investigate aspects of the metaphysics of data-visualization — in what measure digital fabrication technology (hardware and software) can help make the astonishing amount of data we have access to online more concrete to the point it can raise collective awareness on the data socio-political related issues.

Why did you decide to use Tweets in your art?

The choice for using #LOVE as the search phrase was to have it standing as a counterpoint to the classification of the countries by the International SOS as riskiest or most dangerous, having the intention of awakening counterbalancing feelings in the audience – love instead of fear or hate; being receptive instead of isolating or avoiding. Using Mosquito – a plug-in suite for the Grasshopper graphical algorithm editor integrated with Rhinoceros 3D modeling tools, it was possible to extract location, profiles, images, and messages from Twitter. Having access to the data, an algorithm was designed to derive complex geometry from data translated into a network of points in space (x, y and z axis). Time was an additional dimension since the choice for using Twitter data tracking specific hashtags from a given search allows navigating a stream of events imprinted in short messages that cannot exceed 280 characters. When in November 2017 Twitter doubled the maximum allowed tweet length from 140 to 280 characters a dramatic impact could be observed in the subsequent years, having this apparently simple change, potentialized the use of the platform to spread fake news, redesigning political scenarios all over the world. The complexity and intricacy of the resultant shapes (data-sculptures) can be seen as a visualization of the complexity and intricacy of the social network itself.

For ‘Geolocated #LOVE’, the Tweets containing the hashtag #love (taken as raw data) were converted using a sequence of components – from characters to numbers lists to points in x, y and z axis – building the spatial network from which an intricate and interlaced continuous surface is generated and converted into a mesh that is inflated instead of being extruded along an axis or following a vector.

In the core of Geolocated #LOVE resides my intention in exploring animism as a strategy to highlight tangible aspects of the information to which we have access through online media and that relies on the use (or misuse) of Big Data. The Tweets used as primary data in the generative process of the sculptures cannot be read in a ‘straight forward fashion’ in the final objects — the four data-sculptures named after Libya, Somalia, South Sudan and the Central African Republic, respectively.

How do you view your use of data? Is the data your medium\ material\ other?

In this respect I would like to use my recent theoretical incursions that includes the effort in elaborating on the idea of what I refer as ‘data-incarnations’. Incarnation in Edgar Wind is seen as the place where empirical experience and metaphysical foundation meet in a unique cognitive and experiential act. His philosophy of Incarnation provides a broad basis for reflection on the relationship between technique and aesthetic thinking, considering that image plays a role in the artistic field comparable to the one the experiment plays in science. Extending this philosophy, which has its roots in Warburg’s Pathosformel, to explore the ways information (data) can be encapsulated in data-sculptures, brings the opportunity to discuss how these objects and the processes and tools involved in their production can subvert conventional information visualization’s implicit objectivity.

In Metaphysics, Aristotle introduces the distinction between matter and form synchronically – matter being the stuff a substance is composed of, and form, the way that stuff is assembled. The distinction between matter and form can be connected to another distinction in Aristotle’s Metaphysics – the one between potentiality and actuality in Book. Aristotle considers actuality to be prior to potency that is understood as not only a principle of change in another thing or in the thing itself regarded as other, but as every principle of movement or of rest. For Aristotle, activity is to potency, as what is awake is in relation to what is asleep — what has been shaped out of the matter is in relation to the matter —, giving form priority over matter and being. These are in Aristotle, the basic building blocks of reality, particular matter-form compounds. Translating these notions and relations to the poetics — discussing the metaphysics of morphogenesis in relation to the use of data to generate form — I propose to understand that data can have different potentialities since it is shaped according to a definition in the visual programming language and environment Grasshopper into a derived geometric form. The matter (in this case, primary data) is linked with potentiality and the substance (in this case, information) is linked with actuality. Navigating several works I produced, one can say that, the as yet not transduced primary data — the birdsong of the Black-capped Chickadee in the work ‘Data-Nests’(2021) or the Tweets containing the hashtag #LOVE in ‘Geolocated #LOVE’ (2020) are only potentially data-sculptures.

From Aristotle’s relations, we can consider that not only can primary data in platforms for algorithmic modeling and real-time rendering such as Rhinoceros/Grasshopper be considered a potential data-sculpture (since it can be transformed into one), but the data composing the data-sculpture is also, in a sense, a potential data-sculpture. It is not the data qua data that is actually a data-sculpture, but the data qua data-sculpture. Considered as matter, the data — the birdsong of the Black-capped Chickadee, Tweets or data from WHO spreadsheets in the work ‘If You Hold a Stone Hold it in Your Hand’ (2020) — remains only potentially the thing (data-sculpture) that it is the matter of. If we go back to the intention of exploring how the idea of Incarnation can be helpful in weaving a reflection on how my poetics are comparable to a scientific experiment (from Wind) we can start by understanding the technical tools that produce the results from the experiment in a scientific context or the data-sculptures in digital arts are subject to the same laws that are intended to be tested and the choice of tools embodies an entire world system.

Which physical and digital challenges have you faced during the creation process and how did you overcome them?

One of the challenges was to decide on the material for carving the data-objects. The choice to use plain wood came while reading Aristotle’s metaphysics on potency and actuality and the metaphors the philosopher uses to explain the core concepts. At the same time, an event can be recollected as an incentive to start experimenting with pine wood. A colleague asked to use the laboratory for digital fabrication I direct at the university to carve the 3D model of a missing part of a small church’s altar – the original piece was destroyed by termites and mold. Their choice was to respect the original and use pine wood to produce the replica. The result was beautiful, and the simplicity had something to say about the idea of ‘raw’, as in ‘raw data’.

How was “Geolocated Love” received by its viewers?

Back in 2020, the Geolocated #LOVE data-sculptures were produced for the collective exhibition “Women in the Arts” exhibition at the MAUC (University of Ceara Museum of Contemporary Art) in the city of Fortaleza, in Brazil. This was the first time that an audience had the chance to see the actual sculptures in an exhibition space. The audience shared a recurrent curiosity about the ‘process’ including the ‘making.’ A superposed layer of interest usually came to the surface after I start explaining the more practical aspects of the conception and production of the data-sculptures – the feeling of the objects and the encapsulated information somehow could awake a sense of connection with the sociopolitical issues risen by the work, following my intentions as an artist. To receive the feedback was rewarding and I can say that they were similar to a comment that I have received on my previous artwork Political Crystal (2018) by Professor Toshikazu Ohshima from the College of Image Arts and Sciences, Ritsumeikan University, Japan. According to Ohshima, the work illustrates or refers to the Japanese concept of KOTODAMA – the understanding from the animism that words have a soul, a shape.

Interested in participating in our group? Membership is only  $25!

Any questions? Feel free to reach out here!